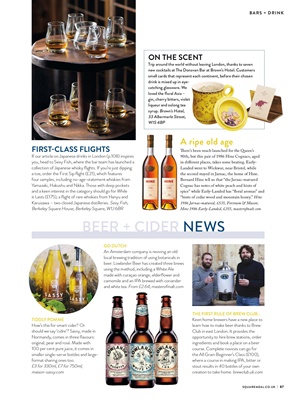 THE FIRST RULE OF BREW CLUB…

Keen home brewers have a new place to

learn how to make beer thanks to Brew

Club in east London. It provides the

ingredients and book a place on a beer

course. Complete novices can go for

where a course in making IPA, bitter or

stout results in 40 bottles of your own

If our article on Japanese drinks in London (p.108) inspires

you, head to Sexy Fish, where the bar team has launched a

collection of Japanese whisky flights. If you're just dipping

a toe, order the First Sip flight (£21), which features

four samples, including no-age-statement whiskies from

Yamazaki, Hakushu and Nikka. Those with deep pockets

and a keen interest in the category should go for While

it Lasts (£175), a flight of rare whiskies from Hanyu and

�ere's been much launched for the Queen's

went to Wickwar, near Bristol, while

the second stayed in Jarnac, the home of Hine.

Bernard Hine tell us that "the Jarnac-matured

Cognac has notes of white peach and hints of

spice" while Early-Landed has "floral aromas" and

Trip around the world without leaving London, thanks to seven

new cocktails at The Donovan Bar at Brown's Hotel. Customers

smell cards that represent each continent, before their chosen

drink is mixed up in eyecatching

An Amsterdam company is reviving an old

using the method, including a White Ale

made with curaçao orange, elderflower and

camomile and an IPA brewed with coriander

How's this for smart cider? Or

should we say 'cidre'? Sassy, made in

original, pear and rosé. Made with