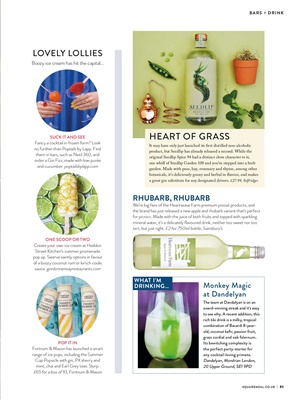 The team at Dandelyan is on an

award-winning streak and it's easy

to see why. A recent addition, this

Its bewitching complexity is

the perfect party-starter for

Fortnum & Mason has launched a smart

range of ice pops, including the Summer

ONE SCOOP OR TWO

Create your own ice cream at Heddon

of a boozy coconut rum or kirsch coulis

SUCK IT AND SEE

no further than Poptails by Lapp. Find

order a Gin Fizz, made with kiwi purée

It may have only just launched its first distilled non-alcoholic

product, but Seedlip has already released a second. While the

original Seedlip Spice 94 had a distinct clove character to it,

garden. Made with peas, hay, rosemary and thyme, among other

botanicals, it's deliciously grassy and herbal in flavour, and makes

a great gin substitute for any designated drivers. £27.99, Selfridges

for picnics. Made with the juice of both fruits and topped with sparkling

mineral water, it's a delicately flavoured drink, neither too sweet nor too