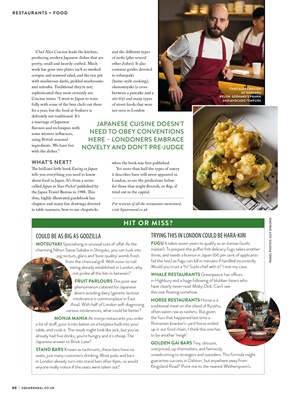 producing modern Japanese dishes that are

pretty, small and heavily crafted. Much

work has gone into plates such as smoked

octopus and seaweed salad, and the rice pot

and mitsuba. Traditional they're not;

sophisticated they most certainly are.

Craciun states: "I went to Japan to train

fully with some of the best chefs out there

for a year, but the food at Sosharu is

definitely not traditional. It's

a marriage of Japanese

flavours and techniques with

ingredients. We have fun

tells you everything you need to know

about food in Japan. It's from a series

called Japan in Your Pocket! published by

chapters and many fun drawings devoted

to table manners, how to use chopsticks

and the different types

of sushi (plus several

other dishes). It also

between a pancake and a

stir-fry) and many types

of street foods that were

not seen in London

when the book was first published.

Yet more than half the types of eatery

it describes have still never appeared in

London, so see the predictions below

tried out in the capital.

For reviews of all the restaurants mentioned,

COULD BE AS BIG AS GODZILLA

charming Nihon Saisei Sakaba in Shinjuku, you can tuck into

from the charcoal grill. With nose-to-tail

eating already established in London, why

not probe all the bits in between?

intolerance is commonplace in East

Asia). With half of London self-diagnosing

various intolerances, what could be better?

a lot of stu­, pour it into batter on a hotplate built into your

already had five drinks, you're hungry and it's cheap. The

STAND BARS Known as tachinomi, these bars have no

seats, just many customers drinking. Most pubs and bars

in London already turn into stand bars after 6pm, so would

anyone really notice if the seats were taken out?

TRYING THIS IN LONDON COULD BE HARA�KIRI

FUGU It takes seven years to qualify as an itamae (sushi

master). To prepare the pu­er fish delicacy fugu takes another

three, and needs a licence in Japan (66 per cent of applicants

fail the test) as fugu can kill in minutes if handled incorrectly.

Would you trust a Yo! Sushi chef with it? I rest my case.

in Highbury and a huge following of blubber-lovers who

this one floating somehow.

HORSE RESTAURANTS Horse is a

traditional meat on the island of Kyushu,

often eaten raw as sashimi. But given

the fuss that happened last time a

up in our food chain, I think this one has

to be another 'neigh'.

overpriced, up themselves, and famously

guarantee success in Dalston, but anywhere away from

Kingsland Road? Point me to the nearest Wetherspoon's.