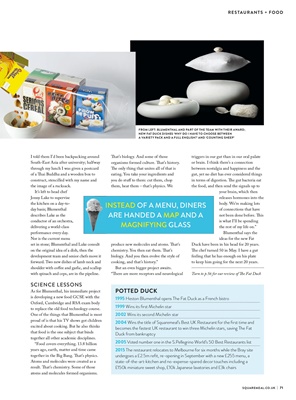 I told them I'd been backpacking around

through my lunch I was given a postcard

of a � ai Buddha and a wooden box to

construct, stencilled with my name and

the image of a rucksack.

It's left to head chef

the kitchen on a day-today

describes Lake as the

conductor of an orchestra,

Nor is the current menu

on the original idea of a dish, then the

shoulder with coff ee and garlic, and scallop

with spinach and ceps, are in the pipeline.

As for Blumenthal, his immediate project

is developing a new food GCSE with the

One of the things that Blumenthal is most

proud of is that his TV shows got children

excited about cooking. But he also thinks

that food is the one subject that binds

together all other academic disciplines.

together in the Big Bang. � at's physics.

Atoms and molecules were created as a

result. � at's chemistry. Some of those

� at's biology. And some of those

� e only thing that unites all of that is

eating. You take your ingredients and

you do stuff to them: cut them, chop

them, heat them - that's physics. We

chemistry. You then eat them. � at's

biology. And you then evolve the style of

But an even bigger project awaits.

"� ere are more receptors and neurological

triggers in our gut than in our oral palate

or brain. I think there's a connection

between nostalgia and happiness and the

gut, yet no diet has ever considered things

the food, and then send the signals up to

your brain, which then

releases hormones into the

of connections that have

not been done before. � is

is what I'll be spending

the rest of my life on."

ideas for the new Fat

Duck have been in his head for 20 years.

feeling that he has enough on his plate

to keep him going for the next 20 years.

INSTEAD OF A MENU, DINERS

ARE HANDED A MAP AND A

INSTEAD FROM LEFT: BLUMENTHAL AND PART OF THE TEAM WITH THEIR AWARD;

NEW FAT DUCK DISHES 'WHY DO I HAVE TO CHOOSE BETWEEN

A VARIETY PACK AND A FULL ENGLISH?' AND 'COUNTING SHEEP'

1995 Heston Blumenthal opens The Fat Duck as a French bistro

2005 Voted number one in the s.pellegrino World's 50 Best Restaurants list