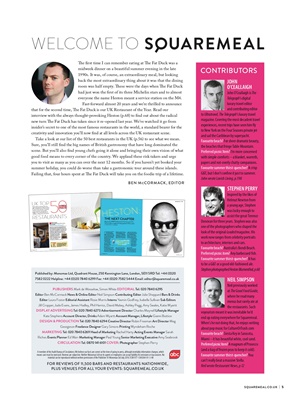 midweek dinner on a beautiful summer evening in the late

1990s. It was, of course, an extraordinary meal, but looking

back the most extraordinary thing about it was that the dining

room was half empty. � ese were the days when � e Fat Duck

everyone the name Heston meant a service station on the M4.

that for the second time, � e Fat Duck is our UK Restaurant of the Year. Read our

interview with the always thought-provoking Heston (p.68) to fi nd out about the radical

insider's secret to one of the most famous restaurants in the world, a standard bearer for the

creativity and innovation you'll now fi nd at all levels across the UK restaurant scene.

Sure, you'll still fi nd the big names of British gastronomy that have long dominated the

scene. But you'll also fi nd young chefs going it alone and bringing their own vision of what

good food means to every corner of the country. We applaud these risk takers and urge

you to visit as many as you can over the next 12 months. So if you haven't yet booked your

summer holiday, you could do worse than take a gastronomic tour around these islands.

Failing that, four hours spent at � e Fat Duck will take you on the foodie trip of a lifetime.

John O'Ceallaigh is The

to Ultratravel, The Telegraph's luxury travel

magazine. Covering the most decadent travel

to New York on the Four Seasons private jet

and sail the Caribbean by superyacht.

the beaches that fringe Table Mountain.

with simple comforts - a blanket, warmth,

Inspired by the likes of

was lucky enough to

one of the photographers who shaped the

look of the original Loaded magazine. His

to architecture, interiors and cars.

Favourite summer thirst-quencher? It has

to be a G&T or a good old-fashioned ale.

at The Good Food Guide,

where he read many

menus but rarely ate at

voyeurism meant it was inevitable he'd

end up eating everywhere for Squaremeal.

When's he not doing that, he enjoys writing

about pop music for cultureortrash.com

(and a bag of frozen peas to keep it cold).

A member of the Audit Bureau of Circulations. We believe our facts are correct at the time of going to press, although inevitably information changes, which

means care must be exercised. Reviews are subjective. Neither Monomax Ltd nor its agents or employees can accept liability for omissions or inaccuracies. No

FOR REVIEWS OF 11,500 BARS AND RESTAURANTS NATIONWIDE,

For fuller reviews of 11,500 restaurants throughout the UK, visit squaremeal.co.uk

The fantastical gastronomy of which dreams are made

While the kitchen spent six months popping up in Melbourne, the

Bray restaurant was getting a makeover. Now Blumenthal is back,

with tantalising innovations ranging from high-tech Japanese loos to

a new, 17-course tasting menu weighing in at £255 per person. Diners

hole into the most creative reaches of the chef's imagination, based

around his perfect childhood holiday. From 'A Change of Air'

(an intensely avoured sphere of aerated beetroot and horseradish

cream that zzes away on the tongue) to

'Counting Sheep' (a meringue on a pillow

actually oating above the table), this is

literally the stu of dreams. You need to

buy into the immersive fantasy, but for sheer

Squaremeal's annual survey has once

again revealed the best of the best when

it comes to UK restaurants. Thousands

of votes have been cast by readers,

reviewers, so all you have to do is book

Prices are based on a two-course dinner (starter and main)

for one, including half a bottle of house wine, co�ee, cover

charge, service and vegetables. The numbers in [] denote

bucket chair in the revamped

talking me through the new menu at �e

food for years," he says. "Ever since opening

the Duck, through In Search of Perfection,

Heston; where we're at now is

the culmination of 20 years'

accolade of being voted the

more, the fame of the restaurant's rst

incarnation propelled Blumenthal to being

one of the UK's most successful cookbook

on a rst-name basis and a familiar face to

millions who could never aord to eat in

his restaurant (though they could aord to

eat the food from his Waitrose range).

�e latest chapter in the Blumenthal

story began with the re-opening of �e Fat

Duck last September. During the £2.5m

to Melbourne while the renovations were

new concept: a 17-course menu based on

the idea of Heston's perfect day at the

seaside. "And nothing," Blumenthal says,

"has been more pivotal in the evolution of

involves ice cream. He remembers being

taken, every Saturday, to Chapel Street

Market, o Edgware Road, by his

grandmother. "It was the last thing I

wanted to do at the weekend," he admits.

"I wanted to go and play in the park.

�e only thing that kept me going was

knowing that on the way

back we'd get a tub of ice

cream in a brown paper

bag to take home. So I

had this real thing for

ice cream: I had to go

through the process of

going to the market and

walking home with it

before I could eat it."

must be sweet. "If you called it frozen

bisque, it was acceptable. But calling it

Winner of our BMW UK Restaurant of the Year award, The

"NOTHING HAS BEEN MORE

PIVOTAL IN THE EVOLUTION

OF THE FAT DUCK THAN THE