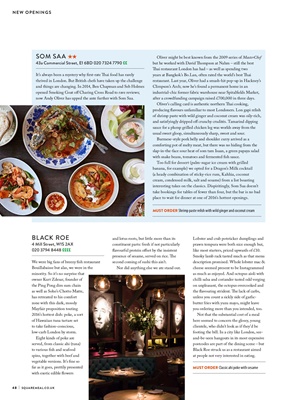 We were big fans of breezy fish restaurant

Bouillabaisse but alas, we were in the

minority. So it's no surprise that

as well as Soho's Chotto Matte,

has retreated to his comfort

zone with this dark, moody

Eight kinds of poke are

to various fish and seafood

spins, together with beef and

vegetable versions. It's fine so

far as it goes, prettily presented

thrived in London. But British chefs have taken up the challenge

and things are changing. In 2014, Ben Chapman and Seb Holmes

and lotus roots, but little more than its

constituent parts: fresh if not particularly

flavourful protein offset by the insistent

second coming of sushi this ain't.

Nor did anything else we ate stand out.

Lobster and crab potsticker dumplings and

prawn tempura were both nice enough but,

Smoky lamb rack tasted much as that menu

cheese seemed present to be Instagrammed

as much as enjoyed. And octopus aïoli with

on unpleasant, the octopus overcooked and

unless you count a sickly side of garlicbutter

you ordering more than you intended, too.

Not that the substantial cost of a meal

clientele, who didn't look as if they'd be

footing the bill. In a city like London, seeand-be-seen

hangouts in its most expensive

postcodes are part of the dining scene - but

Black Roe struck us as a restaurant aimed

Oliver might be best known from the 2009 series of MasterChef

but he worked with David �ompson at Nahm - still the best

�ai restaurant London has had - as well as spending two

restaurant. Last year, Oliver had a smash-hit pop-up in Hackney's

Climpson's Arch; now he's found a permanent home in an

after a crowdfunding campaign raised £700,000 in three days.

of shrimp paste with wild ginger and coconut cream was oily-rich,

Burmese-style pork belly and shoulder curry arrived as a

comforting pot of melty meat, but there was no hiding from the

Too full for dessert (palm-sugar ice cream with grilled

banana, for example) we opted for a Dragon's Milk cocktail

cream, condensed milk, salt and sesame) from a list boasting

take bookings for tables of fewer than four, but the bar is no bad

place to wait for dinner at one of 2016's hottest openings.