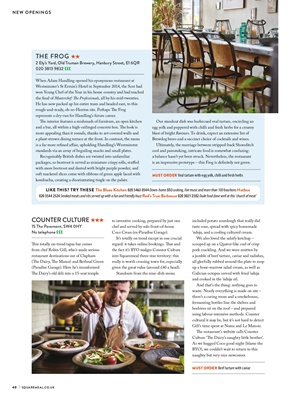 from chef Robin Gill, who's made serious

restaurant destinations out of Clapham

MUST ORDER Beef tartare with caviar

When Adam Handling opened his eponymous restaurant at

Westminster's St Ermin's Hotel in September 2014, the Scot had

the fi nal of Masterchef: � e Professionals, all by his mid-twenties.

He has now packed up his entire team and headed east, to this

� e interior features a mishmash of furniture, an open kitchen

and a bar, all within a high-ceilinged concrete box. � e look is

more appealing than it sounds, thanks to art-covered walls and

a plant-strewn dining terrace at the front. In contrast, the menu

standards via an array of beguiling snacks and small plates.

with more beetroot and dusted with bright purple powder; and

kombucha, creating a disorientating tingle on the palate.

Our standout dish was barbecued veal tartare, encircling an

blast of bright fl avours. To drink, expect an extensive list of

Brewdog beers and a succinct choice of cocktails and wines.

Ultimately, the marriage between stripped-back Shoreditch

a balance hasn't yet been struck. Nevertheless, the restaurant

is an impressive prototype - this Frog is defi nitely not green.

to inventive cooking, prepared by just one

chef and served by solo front-of-house

It's totally on trend except in one crucial

regard: it takes online bookings. � at and

into Squaremeal three-star territory: this

really is worth crossing town for, especially

Standouts from the nine-dish menu

included potato sourdough that really did

'nduja, and a cooling cultured cream.

We also loved the salsify ketchup -

scooped up on a Quaver-like curl of crisp

pork crackling. And we were smitten by

a jumble of beef tartare, caviar and radishes,

all gleefully rubbed around the plate to mop

up a bone-marrow salad cream, as well as

and cooked in the 'nduja oil.

And that's the thing: nothing goes to

waste. Nearly everything is made on site -

there's a curing room and a smokehouse,

fermenting bottles line the shelves and

beehives sit on the roof - and prepared

cultural it may be, but it's not hard to detect

As we hugged Coco good night (blame the

BYO), we couldn't wait to return to this