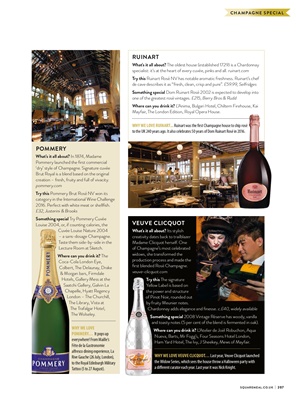 Brut Royal is a blend based on the original

category in the International Wine Challenge

2016. Perfect with white meat or shellfish.

Taste them side-by-side in the

Where can you drink it? The

Hotels, Gallery Mess at the

The Library, Vista at

POMMERY… It pops up

to the Royal Edinburgh Military

What's it all about? The oldest house (established 1729) is a Chardonnay

specialist: it's at the heart of every cuvée, pinks and all. ruinart.com

Something special Dom Ruinart Rosé 2002 is expected to develop into

one of the greatest rosé vintages. £215, Berry Bros & Rudd

Where can you drink it? L'Anima, Bulgari Hotel, Chiltern Firehouse, Kai

WHY WE LOVE RUINART... Ruinart was the �rst Champagne house to ship rosé

What's it all about? Its stylish

creativity dates back to trailblazer

Madame Clicquot herself. One

of Champagne's most celebrated

widows, she transformed the

production process and made the

Try this The signature

Yellow Label is based on

the power and structure

of Pinot Noir, rounded out

and toasty notes (5 per cent of the blend is fermented in oak).

Where can you drink it? L'Atelier de Joël Robuchon, Aqua

the Widow Series, which sees the house throw a Halloween party with

a di�erent curator each year. Last year it was Nick Knight.