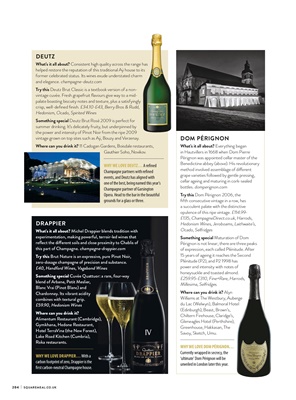 What's it all about? Consistent high quality across the range has

helped restore the reputation of this traditional Aÿ house to its

cuvée. Fresh grapefruit flavours give way to a midpalate

boasting biscuity notes and texture, plus a satisfyingly

Something special Deutz Brut Rosé 2009 is perfect for

summer drinking. It's delicately fruity, but underpinned by

the power and intensity of Pinot Noir from the ripe 2009

vintage grown on top sites such as Aÿ, Bouzy and Verzenay.

Where can you drink it? 11 Cadogan Gardens, Boisdale restaurants,

WHY WE LOVE DEUTZ… A re�ned

events, and Deutz has aligned with

one of the best, being named this year's

Opera. Head to the bar in the beautiful

grounds for a glass or three.

What's it all about? Everything began

in Hautvillers in 1668 when Dom Pierre

Pérignon was appointed cellar master of the

Benedictine abbey (above). His revolutionary

cellar ageing and maturing in cork-sealed

fifth consecutive vintage in a row, has

a succulent palate with the distinctive

Something special Maturation of Dom

Pérignon is not linear; there are three peaks

of expression, each called Plénitude. After

15 years of ageing it reaches the Second

power and intensity with notes of

Where can you drink it? Alyn

Williams at The Westbury, Auberge

WHY WE LOVE DOM PÉRIGNON…

Currently wrapped in secrecy, the

'ultimate' Dom Pérignon will be

unveiled in London later this year.

What's it all about? Michel Drappier blends tradition with

reflect the dierent soils and close proximity to Chablis of

this part of Champagne. champagne-drappier.com

Try this Brut Nature is an expressive, pure Pinot Noir,

zero-dosage champagne of precision and substance.

Where can you drink it?

WHY WE LOVE DRAPPIER… With a

carbon footprint of zero, Drappier is the