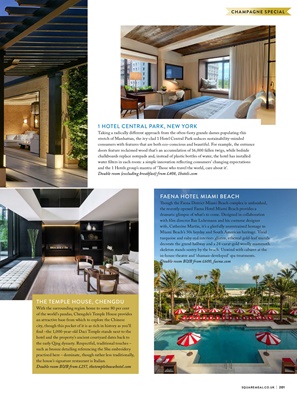 dramatic glimpse of what's to come. Designed in collaboration

with lm director Baz Luhrmann and his costume designer

wife, Catherine Martin, it's a gleefully unrestrained homage to

decorate the grand hallway and a 24-carat-gold woolly mammoth

skeleton stands sentry by the beach. Unwind with cabaret at the

consumers with features that are both eco-conscious and beautiful. For example, the entrance

chalkboards replace notepads and, instead of plastic bottles of water, the hotel has installed

and the 1 Hotels group's mantra of '�ose who travel the world, care about it'.

With the surrounding region home to some 80 per cent

an attractive base from which to explore the Chinese

city, though this pocket of it is as rich in history as you'll

hotel and the property's ancient courtyard dates back to

such as bronze detailing referencing the Shu embroidery

the house's signature restaurant is Italian.