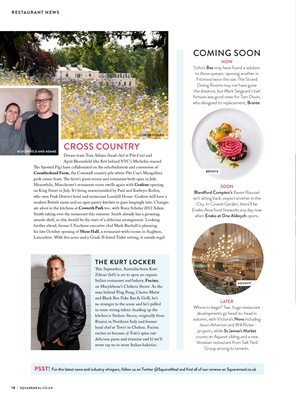 e Spotted Pig) have collaborated on the refurbishment and conversion of

pork comes from. e farm's guest rooms and restaurant both open in July.

on King Street in July. It's being masterminded by Paul and Kathryn Roden,

who own Peak District hotel and restaurant Losehill House. Grafene will have a

modern British menu and an open pastry kitchen to gaze longingly into. Changes

are afoot in the kitchens at Coworth Park too, with Roux Scholar 2012 Adam

Smith taking over the restaurant this summer. Smith already has a groaning

awards shelf, so this should be the start of a delicious arrangement. Looking

his late October opening of Moor Hall, a restaurant-with-rooms in Aughton,

Lancashire. With �ve acres and a Grade II-listed Tudor setting, it sounds regal.

Soho's Bao may have found a solution

to those queues: opening another in

Fitzrovia twice the size. The Strand

Dining Rooms may not have gone

the distance, but Mark Sargeant's bad

who designed its replacement, Bronte.

isn't sitting back: expect another in the

City. In Covent Garden, there'll be

when Eneko at One Aldwych opens.

Where to begin? Two huge restaurant

autumn, with Victoria's Nova including

Jason Atherton and Will Ricker

counts an Aquavit sibling and a new

Group among its tenants.

PSST! For the latest news and industry whispers, follow us on Twitter @SquareMeal and find all of our reviews on squaremeal.co.uk

Zdesar (left) is set to open an organic

on Marylebone's Chiltern Street. As the

no stranger to the scene and he's pulled

in some strong talent: heading up the

kitchen is Stefano Stecca, originally from

Rimini in Northern Italy and former

excites us because a) Toto's spins out

delicious pasta and tiramisu and b) we'll