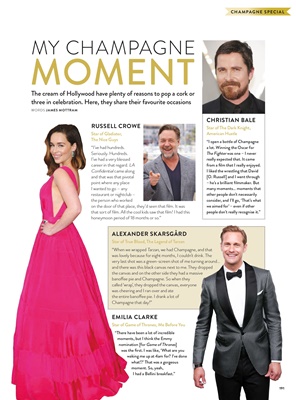 three in celebration. Here, they share their favourite occasions

Star of The Dark Knight,

"I open a bottle of Champagne

a lot. Winning the Oscar for

The Fighter was one - I never

really expected that. It came

from a film that I really enjoyed.

I liked the wrestling that David

[O. Russell] and I went through

- he's a brilliant filmmaker. But

many moments… moments that

consider, and I'll go, 'That's what

we aimed for' - even if other

I've had a very blessed

career in that regard. LA

and that was that pivotal

point where any place

I wanted to go - any

the person who worked

on the door of that place, they'd seen that film. It was

that sort of film. All the cool kids saw that film! I had this

honeymoon period of 18 months or so."

Star of True Blood, The Legend of Tarzan

"When we wrapped Tarzan, we had Champagne, and that

was lovely because for eight months, I couldn't drink. The

and there was this black canvas next to me. They dropped

the canvas and on the other side they had a massive

banoee pie and Champagne. So when they

called 'wrap', they dropped the canvas, everyone

was cheering and I ran over and ate

the entire banoee pie. I drank a lot of

Star of Game of Thrones, Me Before You

"There have been a lot of incredible

moments, but I think the Emmy

nomination [for Game of Thrones]

was the first. I was like, 'What are you

waking me up at 4am for? I've done

what!?' That was a gorgeous

I had a Bellini breakfast."