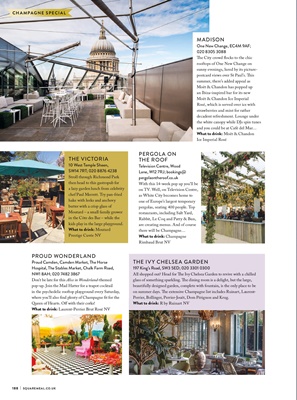 rooftops of One New Change on

sunny evenings, lured by its picturepostcard

views over St Paul's. �is

Moët & Chandon has popped up

an Ibiza-inspired bar for its new

Rosé, which is served over ice with

strawberries and mint for rather

and you could be at Café del Mar…

What to drink: Moët & Chandon

then head to this gastropub for

a lazy garden lunch from celebrity

hake with leeks and anchovy

butter with a crisp glass of

in the Côte des Bar - while the

kids play in the large playground.

What to drink: Moutard

With this 14-week pop up you'll be

on TV. Well, on Television Centre,

as White City becomes home to

one of Europe's largest temporary

are creating menus. And of course

there will be Champagne…

What to drink: Champagne

All shopped out? Head for �e Ivy Chelsea Garden to revive with a chilled

glass of something sparkling. �e dining room is a delight, but the large,

beautifully designed garden, complete with fountain, is the only place to be

What to drink: R by Ruinart NV

Don't be late for this Alice in Wonderland-themed

pop-up. Join the Mad Hatter for a teapot cocktail

in the psychedelic rooftop playground every Saturday,

where you'll also find plenty of Champagne fit for the

Queen of Hearts. Off with their corks!