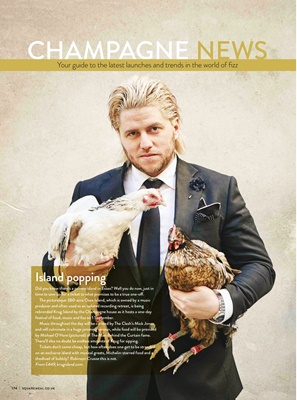 Did you know there's a private island in Essex? Well you do now, just in

time to save up for a ticket to what promises to be a true one-o  .

The picturesque 380-acre Osea Island, which is owned by a music

producer and often used as an isolated recording retreat, is being

festival of food, music and fi zz on 1 September.

and will culminate in a huge jamming session, while food will be provided

by Michael O'Hare (pictured) of The Man Behind the Curtain fame.

There'll also no doubt be endless amounts of Krug for sipping.

Tickets don't come cheap, but how often does one get to be stranded

on an exclusive island with musical greats, Michelin-starred food and a

shedload of bubbly? Robinson Crusoe this is not.