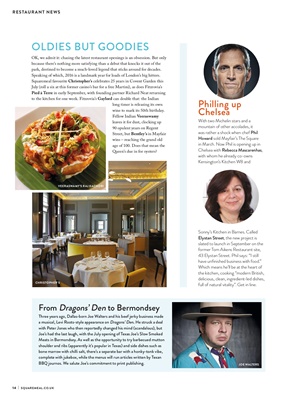 OK, we admit it: chasing the latest restaurant openings is an obsession. But only

park, destined to become a much-loved legend that sticks around for decades.

Speaking of which, 2016 is a landmark year for loads of London's big hitters.

July (roll a six at this former casino's bar for a free Martini), as does Fitzrovia's

to the kitchen for one week. Fitzrovia's Gaylord can double that: the Indian

long timer is releasing its own

wine to mark its 50th birthday.

leaves it for dust, clocking up

Street, but Bentley's in Mayfair

Queen's due in for oysters?

With two Michelin stars and a

mountain of other accolades, it

was rather a shock when chef Phil

in March. Now Phil is opening up in

with whom he already co-owns

Elystan Street, the new project is

slated to launch in September on the

have unfi nished business with food."

Which means he'll be at the heart of

full of natural vitality". Get in line.

From Dragons' Den to Bermondsey

Three years ago, Dallas-born Joe Walters and his beef jerky business made

a musical, Levi Roots-style appearance on Dragons' Den. He struck a deal

with Peter Jones who then reportedly changed his mind (scandalous), but

Joe's had the last laugh, with the July opening of Texas Joe's Slow Smoked

Meats in Bermondsey. As well as the opportunity to try barbecued mutton

bone marrow with chilli salt, there's a separate bar with a honky-tonk vibe,

complete with jukebox, while the menus will run articles written by Texan