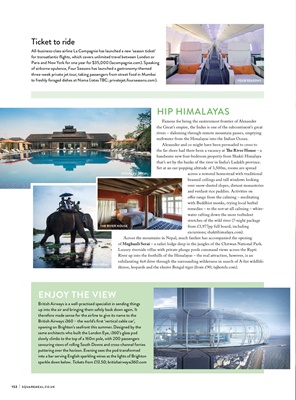 Famous for being the easternmost frontier of Alexander

the Great's empire, the Indus is one of the subcontinent's great

meltwater from the Himalayas into the Indian Ocean.

Alexander and co might have been persuaded to cross to

that's set by the banks of the river in India's Ladakh province.

Set at an ear-popping altitude of 3,500m, rooms are spread

across a restored homestead with traditional

and verdant rice paddies. Activities on

offer range from the calming - meditating

remedies - to the not-at-all calming - whitewater

rafting down the more turbulent

Across the mountains in Nepal, much fanfare has accompanied the opening

of Meghauli Serai - a safari lodge deep in the jungles of the Chitwan National Park.

River up into the foothills of the Himalayas - the real attraction, however, is an

exhilarating 4x4 drive through the surrounding wilderness in search of A-list wildlife:

rhinos, leopards and the elusive Bengal tiger (from £90; tajhotels.com).

British Airways is a well-practised specialist in sending things

up into the air and bringing them safely back down again. It

opening on Brighton's seafront this summer. Designed by the

slowly climbs to the top of a 160m pole, with 200 passengers

puttering over the horizon. Evening sees the pod transformed

sparkle down below. Tickets from £13.50; britishairwaysi360.com

for transatlantic flights, which covers unlimited travel between London or

Paris and New York for one year for $35,000 (lacompagnie.com). Speaking

of airborne opulence, Four Seasons has launched a gastronomy-themed