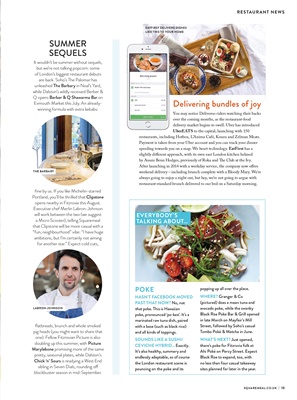 It wouldn't be summer without sequels,

but we're not talking popcorn: some

are back. Soho's The Palomar has

unleashed The Barbary in Neal's Yard,

Exmouth Market this July. An alreadywinning

Portland, you'll be thrilled that Clipstone

opens nearby in Fitzrovia this August.

will work between the two (we suggest

that Clipstone will be more casual with a

"fun, neighbourhood" vibe: "I have huge

ambitions, but I'm certainly not aiming

for another star." Expect cold cuts,

one). Fellow Fitzrovian Picture is also

doubling up this summer, with Picture

Marylebone promising more of the same

PAST THAT NOW? No, not

that poke. This is Hawaiian

with a base (such as black rice)

and all kinds of toppings.

It's also healthy, summery and

endlessly adaptable, so of course

the London restaurant scene is

pouncing on the poke and its

popping up all over the place.

(pictured) does a mean tuna and

avocado poke, while the swanky

in late March on Mayfair's Mill

there's poke for Fitzrovia folk at

Black Roe to expand, too, with

no less than four casual takeaway

sites planned for later in the year.

You may notice Deliveroo riders watching their backs

over the coming months, as the restaurant-food

UberEATS to the capital, launching with 150

speeding towards you on a map. We heart technology. EatFirst has a

by Aussie Benn Hodges, previously of Roka and � e Club at the Ivy.

After launching in 2014 with a weekday service, the company now off ers

weekend delivery - including brunch complete with a Bloody Mary. We're

always going to enjoy a night out, but hey, we're not going to argue with

restaurant-standard brunch delivered to our bed on a Saturday morning.