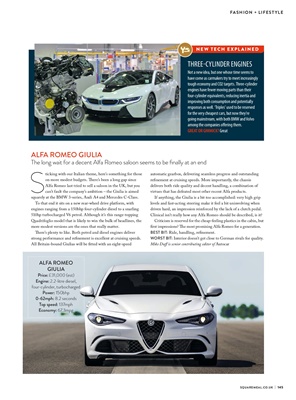 Not a new idea, but one whose time seems to

have come as carmakers try to meet increasingly

engines have fewer moving parts than their

improving both consumption and potentially

responses as well. 'Triples' used to be reserved

for the very cheapest cars, but now they're

going mainstream, with both BMW and Volvo

among the companies o�ering them.

ticking with our Italian theme, here's something for those

on more modest budgets. �ere's been a long gap since

Alfa Romeo last tried to sell a saloon in the UK, but you

can't fault the company's ambition - the Giulia is aimed

squarely at the BMW 3-series, Audi A4 and Mercedes C-Class.

To that end it sits on a new rear-wheel drive platform, with

engines ranging from a 150bhp four-cylinder diesel to a snarling

510hp turbocharged V6 petrol. Although it's this range-topping

Quadrifoglio model that is likely to win the bulk of headlines, the

more modest versions are the ones that really matter.

�ere's plenty to like. Both petrol and diesel engines deliver

strong performance and refinement is excellent at cruising speeds.

All Britain-bound Giulias will be fitted with an eight-speed

delivers both ride quality and decent handling, a combination of

virtues that has defeated most other recent Alfa products.

If anything, the Giulia is a bit too accomplished: very high grip

driven hard, an impression reinforced by the lack of a clutch pedal.

Clinical isn't really how any Alfa Romeo should be described, is it?

Criticism is reserved for the cheap-feeling plastics in the cabin, but

first impressions? �e most promising Alfa Romeo for a generation.