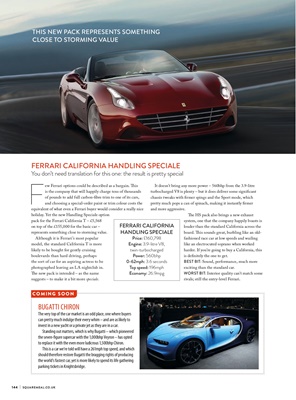 You don't need translation for this one: the result is pretty special

THIS NEW PACK REPRESENTS SOMETHING

ew Ferrari options could be described as a bargain. �is

is the company that will happily charge tens of thousands

of pounds to add full carbon-fibre trim to one of its cars,

and choosing a special-order paint or trim colour costs the

represents something close to storming value.

Although it is Ferrari's most popular

likely to be bought for gently cruising

the sort of car for an aspiring actress to be

photographed leaving an LA nightclub in.

�e new pack is intended - as the name

suggests - to make it a bit more speciale.

turbocharged V8 is plenty - but it does deliver some significant

chassis tweaks with firmer spings and the Sport mode, which

pretty much pops a can of spinach, making it instantly firmer

system, one that the company happily boasts is

louder than the standard California across the

harder. If you're going to buy a California, this

is definitely the one to get.

exciting than the standard car.

The very top of the car market is an odd place, one where buyers

invest in a new yacht or a private jet as they are in a car.

Standing out matters, which is why Bugatti - which pioneered

the seven-�gure supercar with the 1,000bhp Veyron - has opted

to replace it with the even more ludicrous 1,500bhp Chiron.

This is a car we're told will have a 261mph top speed, and which

should therefore restore Bugatti the bragging rights of producing

the world's fastest car, yet is more likely to spend its life gathering