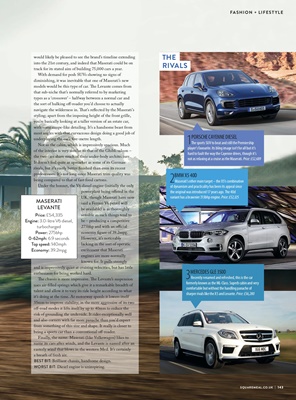 Recently renamed and refreshed, this is the car

formerly known as the ML-Class. Superb cabin and very

comfortable but without the handling panache of

The sports SUV to beat and still the Premiership

player's favourite. Its bling image isn't for all but it's

hard to fault the way the Cayenne drives, though it's

would likely be pleased to see the brand's timeline extending

into the 21st century, and indeed that Maserati could be on

With demand for posh SUVs showing no signs of

diminishing, it was inevitable that one of Maserati's new

models would be this type of car. � e Levante comes from

that sub-niche that's normally referred to by marketing

types as a 'crossover' - halfway between a normal car and

the sort of hulking off -roader you'd choose to actually

navigate the wilderness in. � at's refl ected by the Maserati's

styling; apart from the imposing height of the front grille,

you're basically looking at a taller version of an estate car,

with some coupe-like detailing. It's a handsome beast from

most angles with that curvaceous design doing a good job of

Not so the cabin, which is impressively spacious. Much

the two cars share much of their under-body architecture.

It doesn't feel quite as upmarket as some of its German

rivals, but it's vastly better fi nished than even its recent

predecessors. It's not long since Maserati trim quality was

being compared to that of fast-food cartons.

Under the bonnet, the V6 diesel engine (initially the only

powerplant being off ered in the

UK, though Maserati have now

said a Ferrari V6 petrol will

be available) is as thoroughly

sensible as such things tend to

be - producing a competitive

275bhp and with an offi cial

lacking in the sort of operatic

known for. It pulls strongly

and is impressively quiet at cruising velocities, but has little

enthusiasm for being worked hard.

it's doing at the time. At motorway speeds it lowers itself

35mm to improve stability; in the more aggressive of its two

risk of grounding the underside. It rides exceptionally well

and also corners with far more panache than you'd expect

from something of this size and shape. It really is closer to

being a sports car than a conventional off -roader.

name its cars after winds, and the Levante is named after an

easterly wind that blows in the western Med. It's certainly

a breath of fresh air.

of dynamism and practicality has been its appeal since

the original was introduced 17 years ago. The 40d