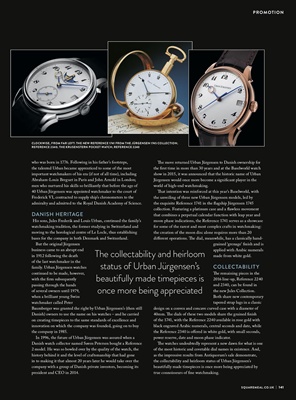 who was born in 1776. Following in his father's footsteps,

the talented Urban became apprenticed to some of the most

important watchmakers of his era (if not of all time), including

Abraham-Louis Breguet in Paris and John Arnold in London;

40 Urban Jürgensen was appointed watchmaker to the court of

Frederick VI, contracted to supply ship's chronometers to the

admiralty and admitted to the Royal Danish Academy of Science.

His sons, Jules Frederik and Louis Urban, continued the family's

watchmaking tradition, the former studying in Switzerland and

moving to the horological centre of Le Locle, thus establishing

bases for the company in both Denmark and Switzerland.

But the original Jürgensen

business came to an abrupt end

in 1912 following the death

of the last watchmaker in the

continued to be made, however,

with the firm subsequently

passing through the hands

when a brilliant young Swiss

Baumberger was granted the right by Urban Jürgensen's (then still

on creating timepieces to the same standards of excellence and

innovation on which the company was founded, going on to buy

In 1996, the future of Urban Jürgensen was assured when a

2 model. He was so bowled over by the quality of the watch, the

history behind it and the level of craftsmanship that had gone

company with a group of Danish private investors, becoming its

show in 2015, it was announced that the historic name of Urban

Jürgensen would once more become a significant player in the

�at intention was reinforced at this year's Baselworld, with

the unveiling of three new Urban Jürgensen models, led by

the exquisite Reference 1741 in the flagship Jürgensen 1745

collection. Featuring a platinum case and a flawless movement

that combines a perpetual calendar function with leap year and

moon phase indications, the Reference 1741 serves as a showcase

for some of the rarest and most complex crafts in watchmaking:

the creation of the moon disc alone requires more than 20

made from white gold.

�e remaining pieces in the

tapered strap lugs in a classic

the Reference 2340 is offered in white gold, with small seconds,

�e watches undoubtedly represent a new dawn for what is one

of the most historic and covetable dial names in existence. And,

as the impressive results from Antiquorum's sale demonstrate,

the collectability and heirloom status of Urban Jürgensen's

beautifully made timepieces is once more being appreciated by

The collectability and heirloom

beautifully made timepieces is

once more being appreciated