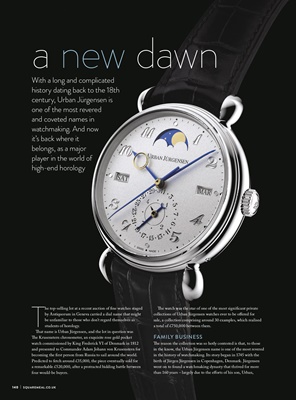 by Antiquorum in Geneva carried a dial name that might

be unfamiliar to those who don't regard themselves as

�at name is Urban Jürgensen, and the lot in question was

watch commissioned by King Frederick VI of Denmark in 1812

and presented to Commander Adam Johann von Krusenstern for

becoming the first person from Russia to sail around the world.

Predicted to fetch around £35,000, the piece eventually sold for

a remarkable £520,000, after a protracted bidding battle between

collections of Urban Jürgensen watches ever to be offered for

sale, a collection comprising around 30 examples, which realised

�e reason the collection was so hotly contested is that, to those

in the know, the Urban Jürgensen name is one of the most revered

in the history of watchmaking. Its story began in 1745 with the

went on to found a watchmaking dynasty that thrived for more

than 160 years - largely due to the efforts of his son, Urban,

a new dawnWith a long and complicated

history dating back to the 18th

one of the most revered

and coveted names in

it's back where it

belongs, as a major

player in the world of