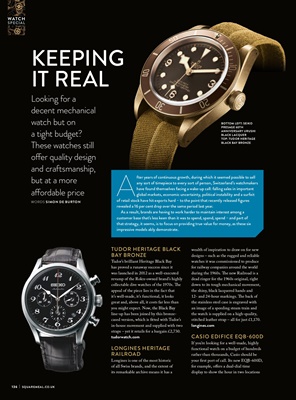 but at a more

has proved a runaway success since it

was launched in 2012 as a well-executed

revamp of the Rolex-owned brand's highly

appeal of the piece lies in the fact that

it's well-made, it's functional, it looks

great and, above all, it costs far less than

line-up has been joined by this bronzecased

version, which is  tted with Tudor's

in-house movement and supplied with two

Longines is one of the most historic

of all Swiss brands, and the extent of

its remarkable archive means it has a

wealth of inspiration to draw on for new

designs - such as the rugged and reliable

watches it was commissioned to produce

for railway companies around the world

down to its tough mechanical movement,

the shiny, black lacquered hands and

the stainless steel case is engraved with

an image of a speeding steam train and

the watch is supplied on a high-quality,

If you're looking for a well-made, highly

functional watch on a budget of hundreds

rather than thousands, Casio should be

display to show the hour in two locations

After years of continuous growth, during which it seemed possible to sell

any sort of timepiece to every sort of person, Switzerland's watchmakers

have found themselves facing a wake-up call: falling sales in important

revealed a 16 per cent drop over the same period last year.

As a result, brands are having to work harder to maintain interest among a

that strategy, it seems, is to focus on providing true value for money, as these six