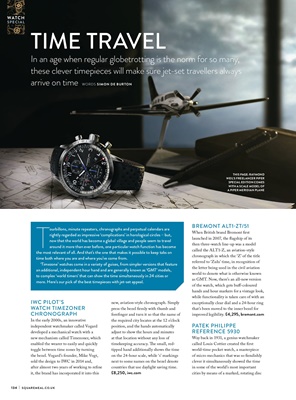 WITH A SCALE MODEL OF

developed a mechanical watch with a

enabled the wearer to easily and quickly

toggle between time zones by turning

after almost two years of working to re­ne

it, the brand has incorporated it into this

rightly regarded as impressive 'complications' in horological circles - but,

around it more than ever before, one particular watch function has become

the most relevant of all. And that's the one that makes it possible to keep tabs on

time both where you are and where you've come from.

'Timezone' watches come in a variety of guises, from simpler versions that feature

an additional, independent hour hand and are generally known as 'GMT' models,

more. Here's our pick of the best timepieces with jet-set appeal.

In an age when regular globetrotting is the norm for so many,

these clever timepieces will make sure jet-set travellers always

press the bezel ­rmly with thumb and

fore­nger and turn it so that the name of

the required city locates at the 12 o'clock

position, and the hands automatically

adjust to show the hours and minutes

at that location without any loss of

on the 24-hour scale, while 's' markings

next to some names on the bezel denote

countries that use daylight saving time.

then three-watch line-up was a model

called the ALT1-Z, an aviation-style

chronograph in which the 'Z' of the title

referred to 'Zulu' time, in recognition of

the letter being used in the civil aviation

world to denote what is otherwise known

of the watch, which gets bu-coloured

hands and hour markers for a vintage look,

while functionality is taken care of with an

that's been moved to the inner bezel for

Way back in 1931, a genius watchmaker

of micro mechanics that was so ­endishly

clever it simultaneously showed the time

in some of the world's most important

cities by means of a marked, rotating disc