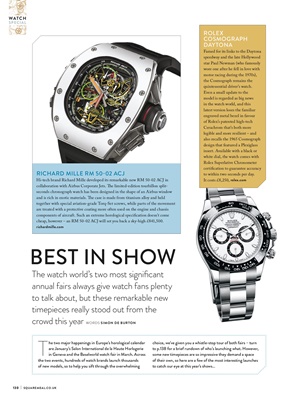 to talk about, but these remarkable new

timepieces really stood out from the

in Geneva and the Baselworld watch fair in March. Across

of new models, so to help you sift through the overwhelming

choice, we've given you a whistle-stop tour of both fairs - turn

to p.138 for a brief rundown of who's launching what. However,

some new timepieces are so impressive they demand a space

of their own, so here are a few of the most interesting launches

to catch our eye at this year's shows…

and is rich in exotic materials.  e case is made from titanium alloy and held

together with special aviation-grade Torq-Set screws, while parts of the movement

Famed for its links to the Daytona

speedway and the late Hollywood

wore one after he fell in love with

the Cosmograph remains the

Even a small update to the

model is regarded as big news

in the watch world, and this

legible and more resilient - and

design that featured a Plexiglass

insert. Available with a black or

white dial, the watch comes with

to within two seconds per day.