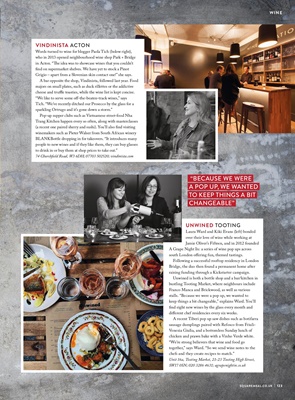 over their love of wine while working at

Jamie Oliver's Fifteen, and in 2012 founded

A Grape Night In: a series of wine pop ups across

Bridge, the duo then found a permanent home after

raising funding through a Kickstarter campaign.

Unwined is both a bottle shop and a bar/kitchen in

bustling Tooting Market, where neighbours include

Franco Manca and Brickwood, as well as various

stalls. "Because we were a pop up, we wanted to

find eight new wines by the glass every month and

A recent Tiberi pop up saw dishes such as botifarra

Giulia, and a bottomless Sunday lunch of

chicken and prawn bake with a Vinho Verde white.

together," says Ward. "So we send wine notes to the

chefs and they create recipes to match."

Words turned to wine for blogger Paola Tich (below right),

in Acton. "�e idea was to showcase wines that you couldn't

find on supermarket shelves. We have yet to stock a Pinot

Grigio - apart from a Slovenian skin contact one!" she says.

A bar opposite the shop, Vindinista, followed last year. Food

majors on small plates, such as duck rillettes or the addictive

cheese and truffle toasties, while the wine list is kept concise.

Tich. "We've recently ditched our Prosecco by the glass for a

sparkling Ortrugo and it's gone down a storm."

Trang Kitchen happen every so often, along with masterclasses

winemakers such as Pieter Walser from South African winery

BLANKBottle dropping in for takeovers. "It introduces many

people to new wines and if they like them, they can buy glasses

to drink in or buy them at shop prices to take out."

A POP UP, WE WANTED

TO KEEP THINGS A BIT