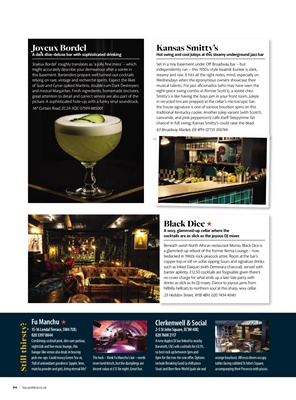 nightclub and live music lounge, this

more lurid kitsch, but the dumplings are

Black Dice A sexy, glammed-up cellar where the

cocktails are as slick as the joyous DJ mixes

a glammed-up reboot of the former Kemia Lounge - now

bedecked in 1960s rock-peacock attire. Roost at the bar's

such as Inked Daiquiri (with Demerara charcoal), served with

drinks as slick as its DJ mixes. Dance to joyous jams from

hillbilly hellcats to northern soul at this sharp, sexy cellar.

'Joyeux Bordel' roughly translates as 'a jolly ¨ ne mess' - which

might accurately describe your demeanour after a soirée in

relying on rare, vintage and recherché spirits. Expect the likes

picture. A sophisticated hole-up, with a funky vinyl soundtrack.

Set in a tiny basement under O  Broadway bar - but

steamy and raw. It hits all the right notes, mind, especially on

Wednesdays when the eponymous owners showcase their

musical talents. For jazz a¨ cionados (who may have seen the

Smitty's is like having the boys jam in your front room. Juleps

in recycled tins are prepped at the cellar's microscopic bar:

the house signature is one of various bourbon spins on this

chance! In full swing, Kansas Smitty's could raise the dead.

A new duplex DJ bar linked to nearby

so best rock up between 5pm and

include Breaking Good (a chilli pisco

accompanying their Prosecco with pizzas.