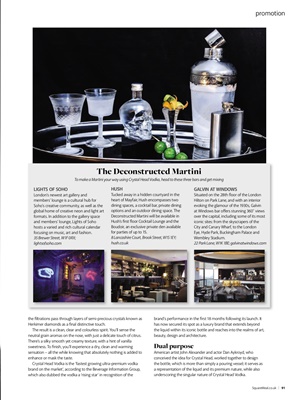 the   ltrations pass through layers of semi-precious crystals known as

The result is a clean, clear and colourless spirit. You'll sense the

neutral grain aromas on the nose, with just a delicate touch of citrus.

There's a silky smooth yet creamy texture, with a hint of vanilla

sweetness. To   nish, you'll experience a dry, clean and warming

sensation - all the while knowing that absolutely nothing is added to

enhance or mask the taste.

brand on the market', according to the Beverage Information Group,

brand's performance in the   rst 18 months following its launch. It

the liquid within its iconic bottle and reaches into the realms of art,

conceived the idea for Crystal Head, worked together to design

the bottle, which is more than simply a pouring vessel; it serves as

a representation of the liquid and its premium nature, while also

To make a Martini your way using Crystal Head Vodka, head to these three bars and get mixing

members' lounge is a cultural hub for

Soho's creative community, as well as the

formats. In addition to the gallery space

and members' lounge, Lights of Soho

focusing on music, art and fashion.

Tucked away in a hidden courtyard in the

options and an outdoor dining space. The

Deconstructed Martini will be available in

Situated on the 28th  oor of the London

Hilton on Park Lane, and with an interior

evoking the glamour of the 1930s, Galvin

over the capital, including some of its most

iconic sites: from the skyscrapers of the

City and Canary Wharf, to the London