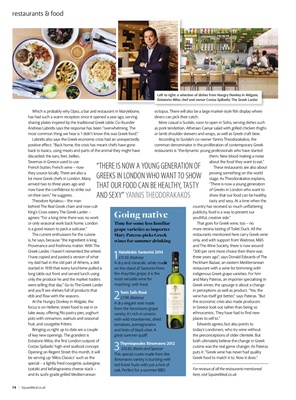 Which is probably why Opso, a bar and restaurant in Marylebone,

has had such a warm reception since it opened a year ago, serving

Andreas Labridis says the response has been "overwhelming. The

most common thing we hear is 'I didn't know this was Greek food'."

Labridis also says the Greek economic crisis had an unexpectedly

positive e ect. "Back home, the crisis has meant chefs have gone

back to basics, using meats and parts of the animal they might have

Tavernas in Greece used to use

they source locally. There are also a

arrived two to three years ago and

now have the con

dence to strike out

on their own," he suggests.

behind The Real Greek chain and now cult

agrees: "For a long time there was no work

or only seasonal work back home. London

is a good reason to pack a suitcase."

The current enthusiasm for the cuisine

is, he says, because "the ingredient is king.

Provenance and freshness matter. With The

I have copied and pasted a version of what

my dad had in the old part of Athens, a deli

started in 1939 that every lunchtime pulled a

only the produce he and the market traders

were selling that day." Go to The Greek Larder

and you'll see shelves full of products that

ebb and  ow with the seasons.

At the Hungry Donkey in Aldgate, the

focus is on Hellenic street food to eat in or

pots with cinnamon, walnuts and seasonal

Bringing us right up to date are a couple

of key new openings. The grandest is

Opening on Regent Street this month, it will

be serving up 'Milos Classics' such as the

and its sushi-grade grilled Mediterranean

octopus. There will also be a large market-style

diners can pick their catch.

More casual is Suvlaki, soon to open in Soho, serving dishes such

or lamb shoulder skewers and wraps, as well as Greek craft beer.

common denominator in the proliferation of contemporary Greek

restaurants is "the dynamic young professionals who have started

them. New blood making a noise

about the food they want to eat."

These restaurants are also about

proving something on the world

"There is now a young generation

of Greeks in London who want to

show that our food can be healthy,

tasty and sexy. At a time when the

publicity, food is a way to present our

That goes for Greek wine, too - no

more retsina tasting of Toilet Duck. All the

only, and with support from Waitrose, MS

and The Wine Society, there is now around

"300 per cent more choice then there was

three years ago", says Donald Edwards of The

indigenous Greek grape varieties. For him

and Mary Pateras, an importer specialising in

Greek wines, the upsurge is about a change

in perceptions as well as product. "Yes, the

wine has itself got better," says Pateras. "But

the economic crisis also made producers

in Greece look out rather than being so

ethnocentric. They have had to

places to sell to."

Edwards agrees, but also points to

today's Londoners, who try wine without

the preconceptions of older clientele. But

both ultimately believe the change in Greek

cuisine was the real game changer. As Pateras

puts it: "Greek wine has never had quality

Greek food to match it to. Now it does."

For reviews of all the restaurants mentioned

Time for some less familiar

A dry and mineralic white made

on the island of Santorini from

the Assyrtiko grape, it is the

most versatile wine for

A dry elegant rosé made

from the Xinomavro grape

variety, it's rich in umami,

and hints of black olive. A

This special cuvée made from the

Xinomavro variety is bursting with

red forest fruits with just a hint of

oak. Perfect for a summer BBQ.

"THERE IS NOW A YOUNG GENERATION OF

GREEKS IN LONDON WHO WANT TO SHOW

THAT OUR FOOD CAN BE HEALTHY, TASTY

Left to right: a selection of dishes from Hungry Donkey in Aldgate;

A dry and mineralic white made

on the island of Santorini from