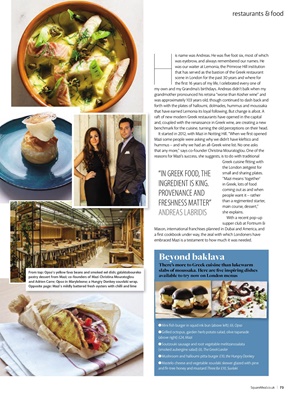 is name was Andreas. He was

ve foot six, most of which

was eyebrow, and always remembered our names. He

was our waiter at Lemonia, the Primrose Hill institution

that has served as the bastion of the Greek restaurant

scene in London for the past 30 years and where for

rst 16 years of my life, I celebrated every one of

my own and my Grandma's birthdays. Andreas didn't balk when my

grandmother pronounced his retsina "worse than Kosher wine" and

was approximately 103 years old, though continued to dash back and

forth with the plates of halloumi, dolmades, hummus and moussaka

that have earned Lemonia its loyal following. But change is afoot. A

raft of new modern Greek restaurants have opened in the capital

and, coupled with the renaissance in Greek wine, are creating a new

benchmark for the cuisine, turning the old perceptions on their head.

Mazi some people were asking why we didn't have kleftico and

hummus - and why we had an all-Greek wine list. No one asks

that any more," says co-founder Christina Mouratoglou. One of the

reasons for Mazi's success, she suggests, is to do with traditional

the London zeitgeist for

in Greek, lots of food

coming out as and when

people want it - rather

than a regimented starter,

With a recent pop-up

Mason, international franchises planned in Dubai and America, and

rst cookbook under way, the zeal with which Londoners have

embraced Mazi is a testament to how much it was needed.

"IN GREEK FOOD, THE