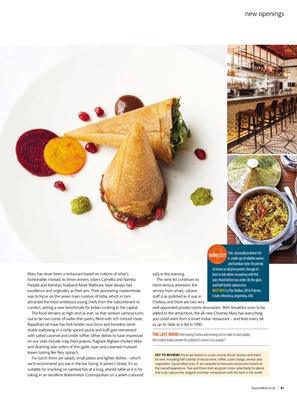 Mary has never been a restaurant based on notions of what's

fashionable; instead, its three owners, sisters Camellia and Namita

Panjabi and Namita's husband Ranjit Mathrani, have always had

excellence and originality as their aim. Their pioneering masterstroke

was to focus on the seven main cuisines of India, which in turn

attracted the most ambitious young chefs from the subcontinent to

London, setting a new benchmark for Indian cooking in the capital.

The food remains as high-end as ever, so that venison samosa turns

out to be two cones of wafer-thin pastry �lled with rich minced meat;

shank wallowing in a richly spiced sauce; and kul� gets reinvented

with salted caramel and cinder toee. Other dishes to have impressed

and diverting side orders of thin garlic naan and creamed mustard

For lunch there are salads, small plates and lighter dishes - which

we'd recommend you eat in the bar facing St James's Street. It's as

suitable for snacking on sandwiches at a long, shared table as it is for

taking in an excellent Watermelon Cosmopolitan on a jewel-coloured

sofa in the evening.

sta is as polished as it was in

Chelsea; and there are two very

well-appointed private rooms downstairs. With breakfast soon to be

added to the attractions, the all-new Chutney Mary has everything

THE LAST WORD After leaving Chelsea and moving east to mark its silver jubilee,

is made up of reliable names

and familiar styles for plenty

of choice at all price points; though it's

best to ask advice on pairing with the

spicy food before you order. By the glass

and half-bottle options too.