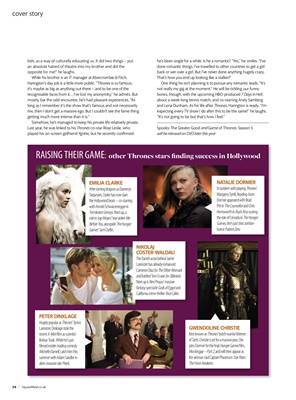 kids, as a way of culturally educating us. It did two things - put

an absolute hatred of theatre into my brother and did the

opposite for me!" he laughs.

While his brother is an IT manager at Abercrombie ¨ Fitch,

Harington's day job is a little more public. "Thrones is so famous,

recognisable faces from it… I've lost my anonymity," he admits. But

mostly, bar the odd encounter, he's had pleasant experiences. "As

me, then I don't get a massive ego. But I couldn't see the fame thing

getting much more intense than it is."

Last year, he was linked to his Thrones co-star Rose Leslie, who

played his on-screen girlfriend Ygritte, but he recently con rmed

done romantic things. I've travelled to other countries to get a girl

back or win over a girl. But I've never done anything hugely crazy.

That's how you end up looking like a stalker!"

One thing he isn't planning is to pursue any romantic leads. "It's

not really my gig at the moment." He will be tickling our funny

bones, though, with the upcoming HBO-produced 7 Days In Hell,

about a week-long tennis match, and co-starring Andy Samberg

and Lena Dunham. As for life after Thrones, Harington is ready. "I'm

expecting every TV show I do after this to be the same!" he laughs.

Spooks: The Greater Good and Game of Thrones: Season 5

will be released on DVD later this year

The Danish actor behind Jaime

Cameron Diaz (in The Other Woman)

and battled Tom Cruise (in Oblivion).

Next up is Alex Proyas' massive

fantasy spectacle Gods of Egypt and

Michelle Darnell, catch him this

summer with Adam Sandler in

of Tarth, Christie is set for a massive year. She

Mockingjay - Part 2, and will then appear as

After taming dragons as Daenerys

with Arnold Schwarzenegger in

Terminator Genisys. Next up, a

role in Jojo Moyes' tear-jerker Me

Before You, alongside The Hunger

In tandem with playing Thrones'

Pitt in The Counsellor and Chris

the role of Cressida in The Hunger