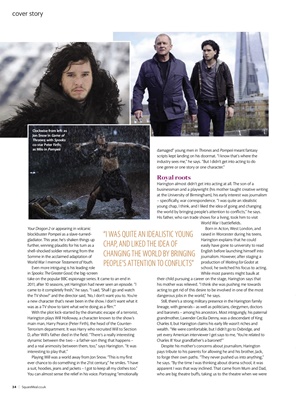 Your Dragon 2 or appearing in volcanic

blockbuster Pompeii as a slave-turnedgladiator.

This year, he's shaken things up

further, winning plaudits for his turn as a

shell-shocked soldier returning from the

Somme in the acclaimed adaptation of

Even more intriguing is his leading role

in Spooks: The Greater Good, the big-screen

take on the popular BBC espionage series. It came to an end in

came to it completely fresh," he says. "I said, 'Shall I go and watch

a new character that's never been in the show. I don't want what it

With the plot kick-started by the dramatic escape of a terrorist,

Harington plays Will Holloway, a character known to the show's

department. It was Harry who recruited Will to Section

D, after Will's father died in the eld. "There's a really interesting

dynamic between the two - a father-son thing that happens -

and a real animosity between them, too," says Harington. "It was

interesting to play that."

Playing Will was a world away from Jon Snow. "This is my rst

ever chance to do something in the 21st century," he smiles. "I have

a suit, hoodies, jeans and jackets - I got to keep all my clothes too."

You can almost sense the relief in his voice. Portraying "emotionally

scripts kept landing on his doormat. "I know that's where the

industry sees me," he says. "But I didn't get into acting to do

one genre or one story or one character."

Harington almost didn't get into acting at all. The son of a

businessman and a playwright (his mother taught creative writing

at the University of Birmingham), his early interest was journalism

- specically, war correspondence. "I was quite an idealistic

young chap, I think, and I liked the idea of going and changing

the world by bringing people's attention to con¥icts," he says.

His father, who ran trade shows for a living, took him to visit

Born in Acton, West London, and

raised in Worcester during his teens,

Harington explains that he could

easily have gone to university to read

English before launching himself into

journalism. However, after staging a

production of Waiting for Godot at

school, he switched his focus to acting.

their child pursuing a career on the stage, Harington says that

his mother was relieved. "I think she was pushing me towards

dangerous jobs in the world," he says.

Still, there's a strong military presence in the Harington family

lineage, with generals - as well as politicians, clergymen, doctors

and baronets - among his ancestors. Most intriguingly, his paternal

grandmother, Lavender Cecilia Denny, was a descendant of King

wealth. "We were comfortable, but I didn't go to Oxbridge, and

yet every American interviewer I get says to me, 'You're related to

Charles II! Your grandfather's a baronet!"'

Despite his mother's concerns about journalism, Harington

pays tribute to his parents for allowing he and his brother, Jack,

to forge their own paths. "They never pushed us into anything,"

he says. "By the time I was thinking about drama school, it was

apparent I was that way inclined. That came from Mum and Dad,

who are big theatre bu§s, taking us to the theatre when we were

"I WAS QUITE AN IDEALISTIC YOUNG

CHAP, AND LIKED THE IDEA OF

CHANGING THE WORLD BY BRINGING

Clockwise from left: as

Jon Snow in Game of

as Milo in Pompeii