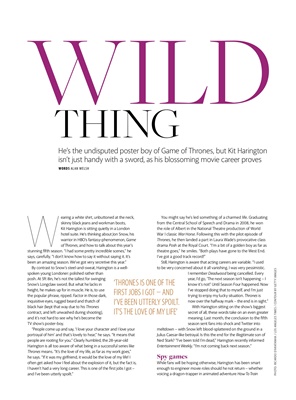 He's the undisputed poster boy of Game of Thrones, but Kit Harington

isn't just handy with a sword, as his blossoming movie career proves

Wearing a white shirt, unbuttoned at the neck,

Kit Harington is sitting quietly in a London

of Thrones, and how to talk about this year's

stunning fth season. "I had some pretty incredible scenes," he

says, carefully. "I don't know how to say it without saying it. It's

been an amazing season. We've got very secretive this year."

By contrast to Snow's steel-and-sweat, Harington is a wellspoken

young Londoner: polished rather than

posh. At 5ft 8in, he's not the tallest for swinging

Snow's Longclaw sword. But what he lacks in

height, he makes up for in muscle. He is, to use

the popular phrase, ripped. Factor in those dark,

black hair (kept that way due to his Thrones

contract, and left unwashed during shooting),

and it's not hard to see why he's become the

"People come up and say, 'I love your character and I love your

portrayal of him' and that's lovely to hear," he says. "It means that

people are rooting for you." Clearly humbled, the 28-year-old

Thrones means. "It's the love of my life, as far as my work goes,"

he says. "If it was my girlfriend, it would be the love of my life! I

often get asked how I feel about the explosion of it, but the fact is,

I haven't had a very long career. This is one of the rst jobs I got -

and I've been utterly spoilt."

You might say he's led something of a charmed life. Graduating

from the Central School of Speech and Drama in 2008, he won

the role of Albert in the National Theatre production of World

War I classic War Horse. Following this with the pilot episode of

Thrones, he then landed a part in Laura Wade's provocative class

drama Posh at the Royal Court. "I'm a bit of a golden boy as far as

theatre goes," he smiles. "Both plays have gone to the West End.

I've got a good track record!"

Still, Harington is aware that acting careers are variable. "I used

to be very concerned about it all vanishing. I was very pessimistic.

I remember Deadwood being cancelled. Every

year, I'd go, 'The next season isn't happening - I

know it's not!' Until Season Four happened. Now

I've stopped doing that to myself, and I'm just

trying to enjoy my lucky situation. Thrones is

now over the halfway mark - the end is in sight."

With Harington sitting on the show's biggest

secret of all, these words take on an even greater

meaning. Last month, the conclusion to the fth

meltdown - with Snow left blood-splattered on the ground in a

Julius Caesar-like betrayal. Is this the end for the illegitimate son of

Entertainment Weekly. "I'm not coming back next season."

While fans will be hoping otherwise, Harington has been smart

enough to engineer movie roles should he not return - whether

voicing a dragon-trapper in animated adventure How To Train

'THRONES IS ONE OF THE

FIRST JOBS I GOT � AND

IT'S THE LOVE OF MY LIFE'