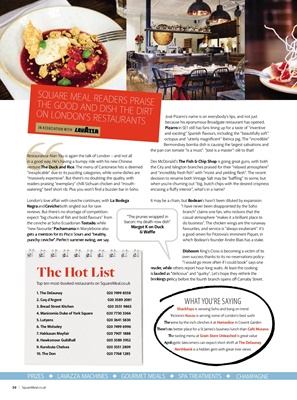 José Pizarro's name is on everybody's lips, and not just

because his eponymous Broadgate restaurant has opened.

and exciting" Spanish  avours, including the "beautifully soft"

Bermondsey bomba dish is causing the largest salivations and

Des McDonald's The Fish � Chip Shop is going great guns, with both

the City and Islington branches praised for their "relaxed atmosphere"

and "incredibly fresh   sh" with "moist and yielding  esh". The recent

decision to rename both Vintage Salt may be "ba ing" to some, but

when you're churning out "big, butch chips with the desired crispness

It may be a chain, but Bodean's hasn't been diluted by expansion:

"I have never been disappointed by the Soho

branch" claims one fan, who reckons that the

casual atmosphere "makes it a brilliant place to

do business". The chicken wings are the runaway

favourites, and service is "always exuberant". It's

a good omen for Fitzrovia's imminent Piquet, in

which Bodean's founder Andre Blais has a stake.

Dishoom King's Cross is becoming a victim of its

"I would go more often if I could book" says one

reader, while others report hour-long waits. At least the cooking

is lauded as "delicious" and "quirky". Let's hope they rethink the

in a good way. He's having a bumpy ride with his new Chinese

venture The Duck and Rice. The menu of Cantonese hits is deemed

"inexplicable" due to its puzzling categories, while some dishes are

"massively expensive". But there's no doubting the quality, with

beef short rib. Plus you won't   nd a buzzier bar in Soho.

Negra and Ceviche both singled out for rave

reviews. But there's no shortage of competition:

expect "big chunks of   sh and bold  avours" from

the ceviche at Soho Ecuadorian Tostado, while

gets a mention for its Pisco Sours and "healthy,

"The prunes wrapped in

Shackfuyu is wowing Soho and bang on trend

Victoria's Kouzu is serving some of London's best sushi

The tasting menu at Grain Store Unleashed is great value

Apologetic latecomers can expect short shrift at The Delaunay

Northbank is a hidden gem with great river views

reader, while others report hour-long waits. At least the cooking

is lauded as "delicious" and "quirky". Let's hope they rethink the

gets a mention for its Pisco Sours and "healthy,

The wine by the inch clinches it at

There's no better place for a St James's business lunch than

The tasting menu at

THE GOOD AND DISH THE DIRT