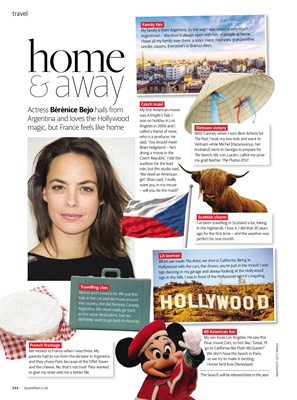 Argentina and loves the Hollywood

My family is from Argentina. So the way I was raised is very much

Argentinian - the door is always open with lots of people at home.

I have all my family over there: a sister, niece, nephews, grandmother,

My son loves Los Angeles. He saw the

We don't have the beach in Paris,

so we try to make it exciting.

The Search will be released later in the year

After Cannes, when I won Best Actress for

The Past, I took my two kids and went to

Vietnam while Michel [Hazanavicius, her

husband] went to Georgia to prepare for

The Search. My son, Lucien, called my prize

my gold feather. The Plume d'Or!

Michel and I travel a lot. We put the

kids in the car and we move around

the country. We did Norway, Canada,

Argentina. We never really go back

to the same destination, but we

definitely want to go back to Norway.

I've been travelling in Scotland a lot, hiking

in the Highlands. I love it. I did that 20 years

ago for the first time - and the weather was

perfect for one month.

We moved to France when I was three. My

parents had to run from the dictator in Argentina

and they chose Paris because of the Eiffel Tower

and the cheese. No, that's not true! They wanted

to give my sister and me a better life.

was A Knight's Tale. I

was on holiday in Los

called a friend of mine,

who is a producer. He

said, 'You should meet

doing a movie in the

Czech Republic.' I did the

audition for the lead

role, but the studio said,

'We need an American

want you in my movie

When we made The Artist, we shot in California. Being in

Hollywood with the cars, the drivers, you're just in the mood. I was

tap-dancing in my garage and always looking at the Hollywood