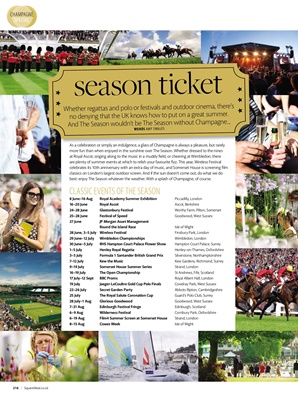 As a celebration or simply an indulgence, a glass of Champagne is always a pleasure, but rarely

more fun than when enjoyed in the sunshine over The Season. Whether dressed to the nines

at Royal Ascot, singing along to the music in a muddy  eld, or cheering at Wimbledon, there

are plenty of summer events at which to relish your favourite  zz. This year, Wireless Festival

celebrates its 10th anniversary with an extra day of music, and Somerset House is screening  lm

classics on London's largest outdoor screen. And if the sun doesn't come out, do what we do

best: enjoy The Season whatever the weather. With a splash of Champagne, of course.

As a celebration or simply an indulgence, a glass of Champagne is always a pleasure, but rarely

no denying that the UK knows how to put on a great summer.

CLASSIC EVENTS OF THE SEASON

Round the Island Race Isle of Wight