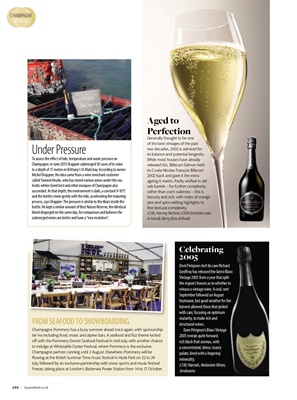 FROM SEAFOOD TO SNOWBOARDING

Champagne Pommery has a busy summer ahead once again, with sponsorship

tie-ins including food, music and alpine bars. A seafood and  zz theme kicked

o with the Pommery Dorset Seafood Festival in mid-July, with another chance

to indulge at Whitstable Oyster Festival, where Pommery is the exclusive

Champagne partner, running until 2 August. Elsewhere, Pommery will be

July, followed by an exclusive partnership with snow sports and music festival

PerfectionGenerally thought to be one

of the best vintages of the past

its balance and potential longevity.

While most houses have already

rather than overt oakiness - this is

biscuity and rich, with notes of orange

zest and spice adding highlights to

Vintage 2005 from a year that split

the region's houses as to whether to

heatwave, but good weather for the

harvest allowed those that picked

with care, focusing on optimum

maturity, to make rich and

palate, lined with a lingering

Under PressureTo assess the e� ect of tide, temperature and water pressure on

Champagne, in June 2013 Drappier submerged 50 cases of its wine

to a depth of 17 metres in Brittany's St-Malo bay. According to owner

Michel Drappier, the idea came from a wine merchant customer

called Yannick Heude, who has stored various wines under the sea.

Acidic whites fared best and other marques of Champagne also

succeeded. At that depth, the environment is dark, a constant 9-10°C

and the bottles move gently with the tide, accelerating the maturing

process, says Drappier. The pressure is similar to the 6bars inside the

bottle. He kept a similar amount of Brut Nature Réserve, the identical

blend disgorged on the same day, for comparison and believes the

submerged wines are better and have a "nice evolution".