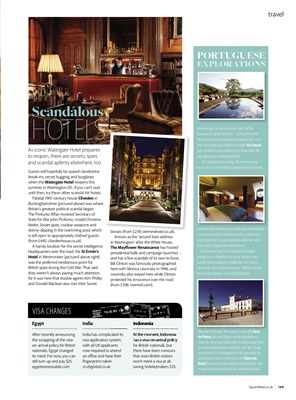 the scrapping of the visaon-arrival

its mind. For now, you can

India has complicated its

with all UK applicants

an o§ ce and have their

At the moment, Indonesia

for British nationals, but

there have been rumours

won't need a visa at all,

Guests will hopefully be spared clandestine

when the Watergate Hotel reopens this

summer in Washington DC. If you can't wait

until then, try these other scandal-hit hotels.

Buckinghamshire (pictured above) was where

skinny-dipping in the swimming pool, which

A handy location for the secret intelligence

headquarters over the road, the St Ermin's

Hotel in Westminster (pictured above right)

was the preferred rendezvous point for

British spies during the Cold War. That said,

they weren't always paying much attention,

for it was here that double agents Kim Philby

to reopen, there are secrets, spies

and scandal aplenty elsewhere, too

a majestic bend on the river, in a landscape of meandering

country lanes and rows of quivering vines. Lodgers can

expect plush rooms, a giant pool and a stellar line-up of

local bottles to glug at the hotel restaurant.

There are other ways of sampling the local tipple

though, such as dropping in on the on-site spa, which

includes (presumably not so traditional) wine-based

Centuries ago, Portuguese seafarers were the first

Europeans to explore the Orient - casting off from the

River Douro bound for adventures on eastern seas. So it's

with some poetic justice that Asian hotelier Six Senses

opens its first European outpost in the Douro Valley this

July, adding to its worldwide portfolio.

Set in an aristocratic-looking 19th-century manor

house, the 57-room hotel (pictured above) looks out over

Known as the 'second best address

in Washington' after the White House,

The May ower Renaissance has hosted

and has a few scandals of its own to boot.

here with Monica Lewinsky in 1996, and

protested his innocence over the road

At the moment, Indonesia

de Palma (pictured above) recently embarked on a

career as a wine hotel, with a cellar stocking vintages from

the surrounding Alentejo countryside, plus high-design

rooms (from £114; torredepalma.com). Meanwhile, the

newcomer on Lisbon's hotel scene is the Valverde

to a grand townhouse (from £114; valverdehotel.com).