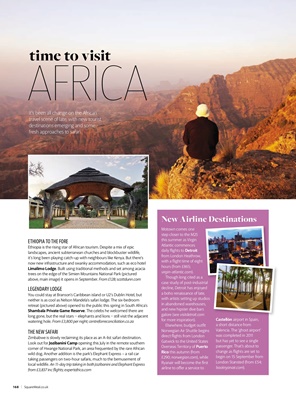 step closer to the M25

this summer as Virgin

with a  ight time of eight

Though long cited as a

a boho renaissance of late,

with artists setting up studios

Gatwick to the United States

Rico this autumn (from

Ryanair will become the   rst

airline to o er a service to

a short distance from

but has yet to see a single

passenger. That's about to

change as  ights are set to

begin on 15 September from

ETHIOPIA TO THE FORE

Ethiopia is the rising star of African tourism. Despite a mix of epic

it's long been playing catch-up with neighbours like Kenya. But there's

now new infrastructure and swanky accommodation, such as eco hotel

trees on the edge of the Simien Mountains National Park (pictured

above, main image) it opens in September. From £128; scottdunn.com

You could stay at Branson's Caribbean island or U2's Dublin Hotel, but

neither is as cool as Nelson Mandela's safari lodge. The six-bedroom

Shambala Private Game Reserve. The celebs he welcomed there are

long gone, but the real stars ¢ elephants and lions ¢ still visit the adjacent

watering hole. From £3,800 per night; centreforreconciliation.co.za

Zimbabwe is slowly reclaiming its place as an A-list safari destination.

corner of Hwange National Park, an area frequented by the rare African

wild dog. Another addition is the park's Elephant Express - a rail car

taking passengers on two-hour safaris, much to the bemusement of

local wildlife. An 11-day trip taking in both Jozibanini and Elephant Express

It's been all change on the African

destinations emerging and some