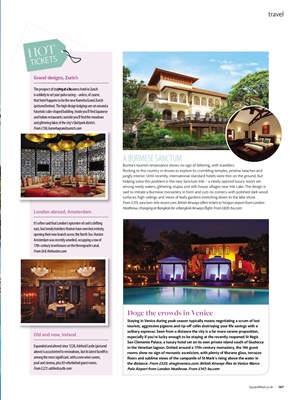 Burma's tourism renaissance shows no sign of faltering, with travellers

 ocking to the country in droves to explore its crumbling temples, pristine beaches and

jungly interior. Until recently, international-standard hotels were thin on the ground, but

among reedy waters, glittering stupas and stilt-house villages near Inle Lake. The design is

said to imitate a Burmese monastery in form and cuts no corners, with polished dark wood

surfaces, high ceilings and views of leafy gardens stretching down to the lake shore.

Heathrow, changing at Bangkok for a Bangkok Airways  ight. From £820; ba.com

The prospect of staying at a business hotel in Zurich

is unlikely to set your pulse racing - unless, of course,

that hotel happens to be the new Kameha Grand Zurich

(pictured below). The high design lodgings are set around a

and Italian restaurants; outside you'll find the meadows

and glittering lakes of the city's Glattpark district.

It's often said that London's epicentre of cool is shifting

opening their new branch across the North Sea. Hoxton

Amsterdam was recently unveiled, occupying a row of

17th-century townhouses on the Herengracht canal.

above) is accustomed to renovations, but its latest facelift is

among the most significant, with a new wine cavern,

Doge the crowds in Venice

tourists, aggressive pigeons and rip-o cafés destroying your life savings with a

solitary espresso. Seen from a distance the city is a far more serene proposition,

San Clemente Palace, a luxury hotel set on its own private island south of Giudecca

in the Venetian lagoon. Dotted around a 17th-century monastery, the 146 guest

rooms show no sign of monastic asceticism, with plenty of Murano glass, terrazzo

The prospect of staying at a business hotel in Zurich

is unlikely to set your pulse racing - unless, of course,