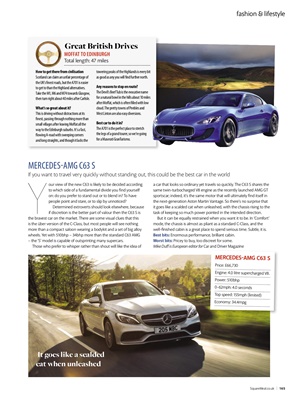 How to get there from civilisation

Scotland can claim an unfair percentage of

to get to than the Highland alternatives.

then turn right about 40 miles after Carlisle.

What's so great about it?

This is driving without distractions at its

� nest, passing through nothing more than

small villages after leaving Mo� at all the

way to the Edinburgh suburbs. It's a fast,

and long straights, and though it lacks the

towering peaks of the Highlands is every bit

as good as any you will � nd further north.

Any reasons to stop en route?

The Devil's Beef Tub is the evocative name

for a natural bowl in the hills about 10 miles

after Mo� at, which is often � lled with low

cloud. The pretty towns of Peebles and

Best car to do it in?

The A701 is the perfect place to stretch

the legs of a grand tourer, so we're going

for a Maserati GranTurismo.

to which side of a fundamental divide you  nd yourself

on: do you prefer to stand out or to blend in? To have

people point and stare, or to slip by unnoticed?

Determined extroverts should look elsewhere, because

the bravest car on the market. There are some visual clues that this

is the über version of the C-Class, but most people will see nothing

- the 'S' model is capable of outsprinting many supercars.

a car that looks so ordinary yet travels so quickly. The C63 S shares the

sportscar; indeed, it's the same motor that will ultimately  nd itself in

the next-generation Aston Martin Vantage. So there's no surprise that

it goes like a scalded cat when unleashed, with the chassis rising to the

task of keeping so much power pointed in the intended direction.

But it can be equally restrained when you want it to be. In 'Comfort'

mode, the chassis is almost as pliant as a standard C-Class, and the

well- nished cabin is a great place to spend serious time. Subtle, it is.

Worst bits: Pricey to buy, too discreet for some.

Mike Du� is European editor for Car and Driver Magazine

If you want to travel very quickly without standing out, this could be the best car in the world