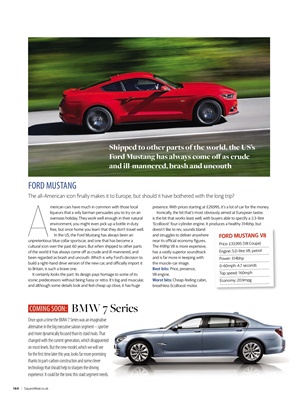 Once upon a time the BMW 7 Series was an imaginative

and more dynamically focused than its staid rivals. That

changed with the current generation, which disappointed

on most levels. But the new model, which we will see

thanks to part-carbon construction and some clever

technology that should help to sharpen the driving

experience. It could be the tonic this staid segment needs.

American cars have much in common with those local

liqueurs that a wily barman persuades you to try on an

overseas holiday. They work well enough in their natural

environment, you might even pick up a bottle in duty

free, but once home you learn that they don't travel well.

In the US, the Ford Mustang has always been an

unpretentious blue collar sportscar, and one that has become a

cultural icon over the past 60 years. But when shipped to other parts

of the world it has always come o as crude and ill-mannered, and

been regarded as brash and uncouth. Which is why Ford's decision to

build a right-hand drive version of the new car, and o¡ cially import it

to Britain, is such a brave one.

It certainly looks the part. Its design pays homage to some of its

iconic predecessors without being fussy or retro. It's big and muscular,

and although some details look and feel cheap up close, it has huge

Ironically, the bit that's most obviously aimed at European tastes

is the bit that works least well, with buyers able to specify a 2.3-litre

'EcoBoost' four-cylinder engine. It produces a healthy 314bhp, but

and struggles to deliver anywhere

near its o¡ cial economy  gures.

has a vastly superior soundtrack

and is far more in keeping with

Shipped to other parts of the world, the US's

Ford Mustang has always come off as crude

and ill-mannered, brash and uncouth

The all-American icon � nally makes it to Europe, but should it have bothered with the long trip?