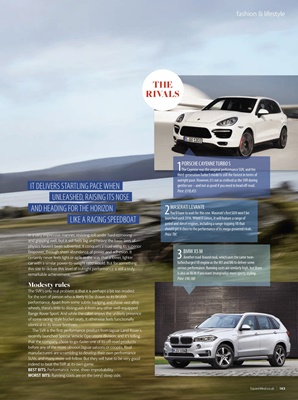 in a very impressive manner, resisting roll under hard cornering

and gripping well, but it still feels big and heavy; the basic laws of

physics haven't been subverted. It conquers a road using its superior

 repower, through sheer abundance of power and adhesion. It

certainly never feels light or agile in the way that a lower, lighter

car with a similar power-to-weight ratio would. But for something

performance. Apart from some subtle badging and those vast alloy

wheels, there's little to distinguish it from any other well-equipped

Range Rover Sport. And while the cabin enjoys the unlikely presence

of some racing-style bucket seats, it otherwise feels functionally

identical to its lesser brethren.

The SVR is the  rst performance product from Jaguar Land Rover's

before any of the more obvious Jaguar saloons or coupés. Rival

manufacturers are scrambling to develop their own performance

SUVs, and many more will follow. But they will have to be very good

indeed to beat the SVR at its own game.

WORST BITS: Running costs are on the (very) steep side.

IT DELIVERS STARTLING PACE WHEN

AND HEADING FOR THE HORIZON

You'll have to wait for this one. Maserati's � rst SUV won't be

launched until 2016. When it comes, it will feature a range of

petrol and diesel engines, including a range-topping V8 that

should get it close to the performance of its mega-powered rivals.

Another road-biased rival, which uses the same twinturbocharged

V8 engine as the M5 and M6 to deliver some

serious performance. Running costs are similarly high, but there

is also an X6 M if you want (marginally) more sporty styling.

The Cayenne was the original performance SUV, and the

outright pace. However, it's not as civilised as the SVR during

gentler use - and not as good if you need to head o� -road.