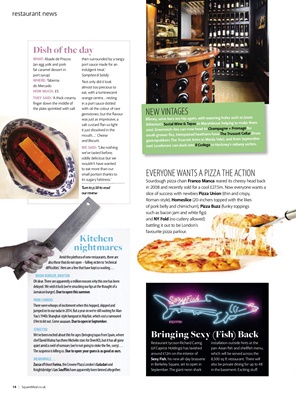 EVERYONE WANTS A PIZZA THE ACTION

slice of success with newbies Pizza Union (thin and crispy,

such as bacon jam and white  gs)

and NY Fold (no cutlery allowed)

battling it out to be London's

(of Caprice Holdings) has lavished

around £12m on the interior of

in Berkeley Square, set to open in

installation outside hints at the

which will be served across the

also be private dining for up to 48

in the basement. Exciting stu .

(an egg yolk and pork

THEY SAID: 'A thick creamy

 nger down the middle of

the plate sprinkled with salt

then surrounded by a tangy

port sauce made for an

'Not only did it look

almost too precious to

eat, with a luminescent

in a port sauce dotted

with oil the colour of rare

gemstones, but the  avour

was just as impressive, a

salt custard  an so light

it just dissolved in the

oddly delicious but we

to eat more than our

small portion thanks to

Amid the plethora of new restaurants, there are

also those that do not open - falling victim to 'technical

difficulties'. Here are a few that have kept us waiting…

Oh dear. There are apparently a million reasons why this one has been

delayed. We wish it luck (we're smacking our lips at the thought of a

Jamaican burger). Due to open this summer.

There were whoops of excitement when this hopped, skipped and

jumped on to our radar in 2014. But a year on we're still waiting for Alan

Yau's 1940s Shanghai-style hangout in Mayfair, which cost a rumoured

£9m to kit out. Come aaaaaan. Due to open in September.

We've been excited about this for ages (bringing tapas from Spain, where

chef David Muñoz has three Michelin stars for DiverXO), but it has all gone

quiet amid a swirl of rumours (we're not going to stoke the fire, sorry)…

The suspense is killing us. Due to open: your guess is as good as ours.

NEW VINTAGESBlimey, wine bars are hip again, with watering holes such as Jason

cool. Greenwich-ites can now head to Champagne + Fromage for

small-grower  zz, Hampstead heathens have The Truscott Cellar (from

gastropubbers The Truscott Arms in Maida Vale), and from September