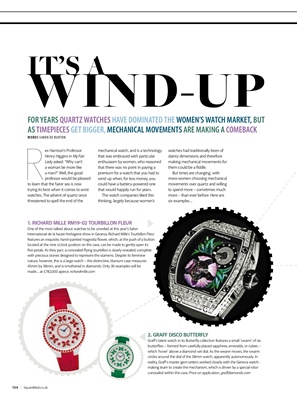 Henry Higgins in My Fair

professor would be pleased

to learn that the fairer sex is now

trying its best when it comes to wrist

watches. The advent of quartz once

threatened to spell the end of the

mechanical watch, and is a technology

that was embraced with particular

enthusiasm by women, who reasoned

that there was no point in paying a

premium for a watch that you had to

wind up when, for less money, you

could have a battery-powered one

that would happily run for years.

The watch companies liked this

AS TIMEPIECES GET BIGGER, MECHANICAL MOVEMENTS ARE MAKING A COMEBACK

features an exquisite, hand-painted magnolia ower, which, at the push of a button

located at the nine o'clock position on the case, can be made to gently open its

ve petals. As they part, a concealed ying tourbillon is slowly revealed, complete

with precious stones designed to represent the stamens. Despite its feminine

nature, however, this is a large watch - the distinctive, titanium case measures

45mm by 38mm, and is smothered in diamonds. Only 30 examples will be

which 'hover' above a diamond-set dial. As the wearer moves, the swarm

circles around the dial of the 38mm watch, apparently autonomously. In

team to create the mechanism, which is driven by a special rotor

concealed within the case. Price on application. gra�diamonds.com

watches had traditionally been of

them could be a ddle.

But times are changing, with

movements over quartz and willing

to spend more - sometimes much

more - than ever before. Here are