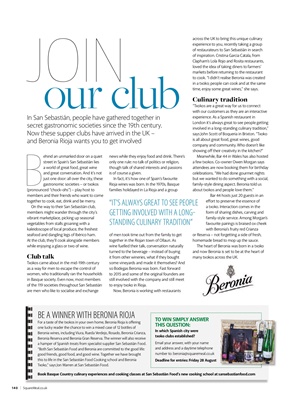 ehind an unmarked door on a quiet

and great conversation. And it's not

just one door: all over the city, these

members and their friends who want to come

together to cook, eat, drink and be merry.

On the way to their San Sebastián club,

vegetables from stalls groaning with a

kaleidoscope of local produce, the freshest

At the club, they'll cook alongside members

while enjoying a glass or two of wine.

Txokos came about in the mid-19th century

as a way for men to escape the control of

women, who traditionally ran the households

in Basque society. Even now, most members

of the 119 societies throughout San Sebastián

news while they enjoy food and drink. There's

only one rule: no talk of politics or religion,

though talk of shared interests and passions

is of course a given.

In fact, it's how one of Spain's favourite

families holidayed in La Rioja and a group

of men took time out from the family to get

turned to the beverage - instead of buying

it from other wineries, what if they bought

some vineyards and made it themselves? And

to 2015 and some of the original founders are

still involved with the company and still meet

to enjoy txoko in Rioja.

Now, Beronia is working with restaurants

In San Sebastián, people have gathered together in

Now these supper clubs have arrived in the UK -

and Beronia Rioja wants you to get involved

across the UK to bring this unique culinary

experience to you, recently taking a group

of restaurateurs to San Sebastián in search

of inspiration. Cristina Garcia Catala, from

loved the idea of taking diners to farmers'

markets before returning to the restaurant

to cook. "I didn't realise Beronia was created

in a txoko; people can cook and at the same

"Txokos are a great way for us to connect

with our customers as they are an interactive

experience. As a Spanish restaurant in

London it's always great to see people getting

involved in a long-standing culinary tradition,"

is all about great food, great wines, good

showing o their creativity in the kitchen?"

attendees are now booking them for birthday

celebrations. "We had done gourmet nights

but we wanted to do something with a social,

about txokos and people love them."

e ort to preserve the essence of

a txoko. Interaction comes in the

form of sharing dishes, carving and

or Reserva - not forgetting a side of fresh,

homemade bread to mop up the sauce.

The heart of Beronia was born in a txoko

and now Beronia is set to be at the heart of

many txokos across the UK.

"IT'S ALWAYS GREAT TO SEE PEOPLE

GETTING INVOLVED WITH A LONG�

BE A WINNER WITH BERONIA RIOJA

For a taste of the txokos in your own home, Beronia Rioja is o ering

"Both San Sebastián Food and Beronia are committed to the good life:

good friends, good food, and good wine. Together we have brought

In which Spanish city were

and address and a daytime telephone