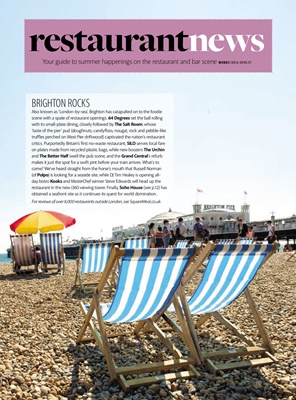 BRIGHTON ROCKSAlso known as 'London-by-sea', Brighton has catapulted on to the foodie

scene with a spate of restaurant openings. 64 Degrees set the ball rolling

with its small-plate dining, closely followed by The Salt Room, whose

on plates made from recycled plastic bags, while new boozers The Urchin

and The Better Half swell the pub scene, and the Grand Central's refurb

makes it just the spot for a swift pint before your train arrives. What's to

(of Polpo) is looking for a seaside site, while DJ Tim Healey is opening allday

bistro Kooks and MasterChef winner Steve Edwards will head up the

restaurant in the new i360 viewing tower. Finally, Soho House (see p.12) has

obtained a seafront site as it continues its quest for world domination.

For reviews of over 6,000 restaurants outside London, see squaremeal.co.uk