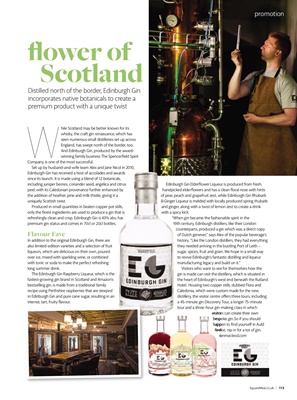 While Scotland may be better known for its

whisky, the craft gin renaissance, which has

England, has swept north of the border, too.

And Edinburgh Gin, produced by the awardwinning

Company, is one of the most successful.

Set up by husband-and-wife team Alex and Jane Nicol in 2010,

Edinburgh Gin has received a host of accolades and awards

since its launch. It is made using a blend of 12 botanicals,

peel, with its Caledonian provenance further enhanced by

the addition of heather, pine and milk thistle, giving it a

refreshingly clean and crisp. Edinburgh Gin is 43% abv, has

premium gin status and comes in 70cl or 20cl bottles.

In addition to the original Edinburgh Gin, there are

also limited-edition varieties and a selection of fruit

liqueurs, which are delicious on their own, poured

over ice, mixed with sparkling wine, or combined

with tonic or soda to make the perfect refreshing

The Edinburgh Gin Raspberry Liqueur, which is the

bestselling gin, is made from a traditional family

in Edinburgh Gin and pure cane sugar, resulting in an

handpicked elder owers and has a clean  oral nose with hints

of pear, peach and grapefruit zest, while Edinburgh Gin Rhubarb

and ginger, along with a twist of lemon zest to create a drink

with a spicy kick.

"When gin became the fashionable spirit in the

counterparts, produced a gin which was a direct copy

of Dutch genever," says Alex of the popular beverage's

they needed arriving in the bustling Port of Leith -

sugar, spices, fruit and grain. We hope in a small way

manufacturing legacy and build on it."

Visitors who want to see for themselves how the

gin is made can visit the distillery, which is situated in

the heart of Edinburgh's west end beneath the Rutland

Caledonia, which were custom made for the new

tour and a three-hour gin-making class in which

visitors can create their own

bespoke gin. So if you should

happen to  nd yourself in Auld

Reekie, nip in for a tot of gin.

incorporates native botanicals to create a

premium product with a unique twist

visitors can create their own

bespoke gin. So if you should

happen to  nd yourself in Auld

Reekie, nip in for a tot of gin.