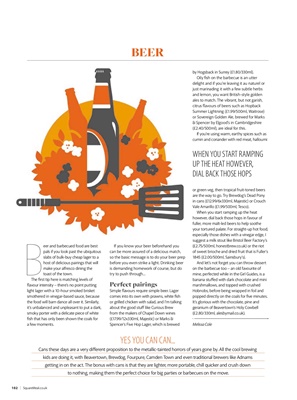 eer and barbecued food are best

pals if you look past the ubiquitous

slabs of bulk-buy cheap lager to a

host of delicious pairings that will

make your alfresco dining the

toast of the town.

The rst tip here is matching levels of

smothered in vinegar-based sauce, because

the food will barn dance all over it. Similarly,

it's unbalanced and unpleasant to put a dark,

smoky porter with a delicate piece of white

sh that has only been shown the coals for

If you know your beer beforehand you

can be more assured of a delicious match,

so the basic message is to do your beer prep

before you even strike a light. Drinking beer

is demanding homework of course, but do

try to push through...

comes into its own with prawns, white sh

or grilled chicken with salad, and I'm talking

from the makers of Chapel Down wines

Oily sh on the barbecue is an utter

delight and if you're leaving it au naturel or

just marinading it with a few subtle herbs

and lemon, you want British-style golden

ales to match. The vibrant, but not garish,

¦ Spencer by Elgood's in Cambridgeshire

If you're using warm, earthy spices such as

are the way to go. Try Brewdog's Dead Pony

When you start ramping up the heat

however, dial back those hops in favour of

especially those dishes with a vinegar edge, I

of sweet brioche and dried fruit that is Fuller's

And let's not forget you can throw dessert

on the barbecue too - an old favourite of

mine, perfected while in the Girl Guides, is a

marshmallows, and topped with crushed

Hobnobs, before being wrapped in foil and

popped directly on the coals for ve minutes.

It's glorious with the chocolate, pine and

Cans these days are a very dierent proposition to the metallic-tainted horrors of years gone by. All the cool brewing

kids are doing it, with Beavertown, Brewdog, Fourpure, Camden Town and even traditional brewers like Adnams

getting in on the act. The bonus with cans is that they are lighter, more portable, chill quicker and crush down

to nothing, making them the perfect choice for big parties or barbecues on the move.

WHEN YOU START RAMPING

UP THE HEAT HOWEVER,

DIAL BACK THOSE HOPS